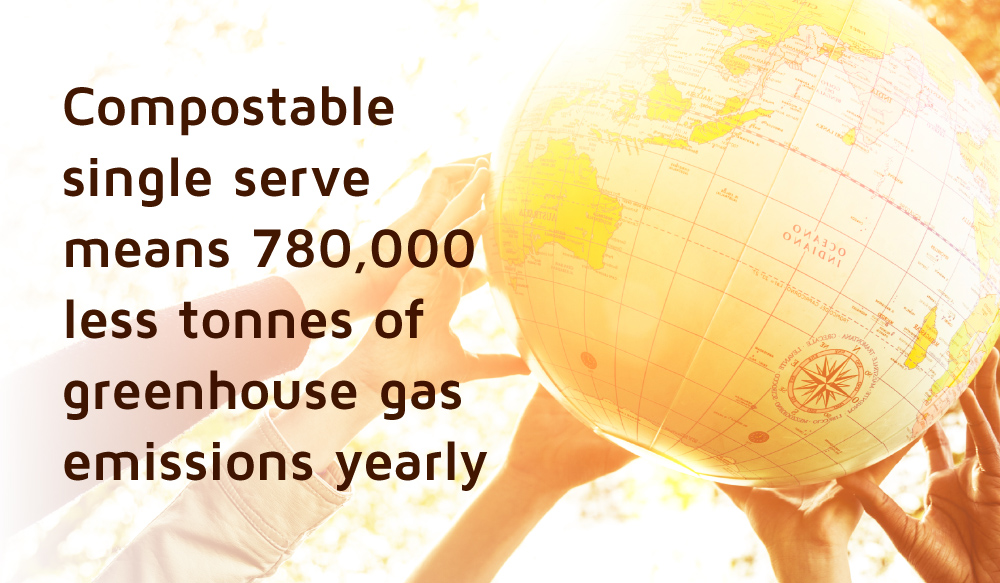 Could Certified 100% Compostable single serve pods be one way to tackle climate change? The evidence says PurPod100™ is a small but important step in the right direction.

Climate change is among the most significant environmental issues facing the world today. The US Environmental Protection Agency points out that Earth’s average temperature has risen by 1.5°F over the past century, and is projected to rise another 0.5 to 8.6°F over the next hundred years. The Agency reminds us that small changes in the average temperature of the planet can translate to large and potentially dangerous shifts in climate and weather.

There are many ways that we can each do our part to limit the rise in greenhouse gases (GHGs) that scientists tell us is driving climate change. Here’s why using PurPod100™ compostable pods is one of them.

Landfills are one important source of GHGs. When food waste, including coffee, is put into a landfill, it breaks down very slowly, releasing methane and other GHGs as it does.

Well-run municipal and industrial composting for food waste is a valuable answer to this problem. Unlike landfills, composting coffee and other food waste generates virtually no methane. And our atmosphere is better off. But composters can’t take single serve encased in petroleum-based plastics.

This is where PurPod100™ can help our climate. When composted, single serve coffee from compostable pods will reduce total greenhouse gas emissions by 140,000 tonnes worldwide compared to the same amount of coffee from non-compostable pods that are almost always sent to landfill.

Virtually eliminating methane from coffee grounds that have been sent to landfill is not the only way that compostable single serve pods can help address the climate change problem. Growing, transporting, roasting, grinding and brewing coffee takes a lot of energy. A 2015 lifecycle analysis of single serve coffee done by Quantis International identified a series of energy use issues that make single serve often a better choice than traditional drip brewed coffee.

The analysis concludes that single serve coffee cuts GHG emissions by 640,000 tonnes each year compared to conventional drip brewing. Switching to PurPod100™ and putting the used pods into a municipal or industrial composting system can reduce greenhouse gas emissions. This can bring overall GHG emissions cuts to a total of 780,000 tonnes compared to conventional drip brewed coffee – a 23% GHG reduction. Compostable coffee pods are clearly one step in the right direction.