For people around the world, coffee is a morning necessity; the day just can’t be started without it. In Colombia, a serving of café tinto isn’t your standard cup of joe. This stuff is the real deal. Coffee has become to Colombia what yellow cabs are to New York—an iconic symbol of economic prosperity. How exactly has coffee become such a staple in the everyday life of Colombians, and how did it become one of their most well-known exports? The answer can be found in the history of coffee, in the geography of the country itself, and in Juan Valdez. 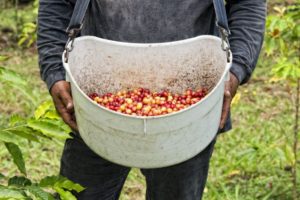 Move over, Starbucks. As the 5th most recognized brand in the world, it’s safe to say Juan Valdez is a pretty big deal. The image of Juan Valdez and his donkey Conchita has served as an emblem of unity for coffee growers the world over since 1959. The man and his mule carrying bags of coffee beans are now inseparable from Colombian coffee. There have only been three men who have ever played the role of Juan Valdez, the current representative being Carlos Castaneda. Fun fact: Castaneda, like Juan Valdez himself, is a coffee grower that hails from the region of Andes in Antioquia. Juan Valdez the character (and eventually the company) was started by the National Federation of Coffee Growers (FNC), which is owned entirely by the 500,000 coffee growers currently growing in Colombia. As a non-profit organization, the FNC protects and advocates for the quality of coffee coming out of Colombia, as well as the quality of life of the people growing it. Because growing coffee is a massive undertaking, sustainability in the industry is a must for anyone who is producing beans. For Colombians, sustainability is at the heart of the matter.

Which of course is one reason why Juan Valdez took its next step, moving its legendary and sustainable coffee practices into the 21st century. In 2011, single-serve coffee took the world by storm. Keurig introduced “K-Cups,” which gave coffee drinkers small packets of coffee that could be produced faster than a typical French press or pour-over drink. Despite their popularity, critics have argued that the plastic used in the cups contribute to environmental degradation. The Juan Valdez answer? Their newest product line: compostable pods. The pods are the first premium coffee to be packed in PURPOD100 technology meaning that the pods are 100% compostable while still being Keurig-friendly. Each pod is designed to break down in just six weeks, using paper, bio-resins, and renewable bio-based materials to speed up the process.

But besides the coffee maker’s pods being sustainable, they also make an incredibly tasty cup of joe. As any true coffee aficionado will tell you, not all brews were created equal. But Juan Valdez painstakingly secures the best in Colombia, where the beans are already some of the highest quality in the world and every coffee produced is 100% mild-washed Arabica. What makes a first class bean, you might ask? To truly understand this differentiation, you have to know a little bit about coffee. There are two major types of coffee bean varieties produced in the world: Arabica and Robusta. Arabica (the kind grown in Colombia) are high quality gourmet beans because they are known for their pleasing flavors and aromatic properties. The beans grown in Colombia are particularly acclaimed due to their mild, balanced flavor. Robusta coffee, by contrast, is generally of lower quality than Arabica beans because they are usually grown at a lower elevation and the flavor is not up to par. 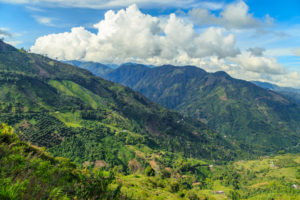 In order to grow coffee that is both unique and pleasant-tasting, the conditions have to be just right. While coffee plants are not known for being particularly volatile, they do have specific environmental requirements to yield high-quality crops. Due to these environmental requirements that only exist in a few places around the world, countries that grow coffee are known as the “coffee belt.” These growing regions can be found throughout Costa Rica, Tanzania, and of course, Colombia. The region of Colombia where most of the coffee is grown exists in the middle of the country, nestled between the cities of Cali, Medellin, and Bogota. One of the most unique aspects of the Colombian growing region is its cycle of tropical rainy seasons. Because the rainy seasons occur at different times of year, the coffee plants are allowed the ability to flower and be harvested at different times; for Colombia this means consistent production for consumers looking for an excellent brew year-round.

Coming in a variety of four real, natural flavors, Juan Valdez’s pods range from the slightly sweet Huila Origin pod, to a flavor that evokes fresh notes from a walk in the forest with the Organic pod. For a bit of perk first thing in the morning, grab a hazelnut and dark chocolate flavored Sierra Nevada pod. This formula was originally developed by indigenous cultures living 5,800 feet above sea level, who needed an intensely-flavored punch that was perfect for early starts. If you’re looking for a way to taste a coffee that comes from native forests reach for the Santander pod, which is balanced and easy to sip. Each pack of pods comes in a box of 10, which ensures you’ll have your morning or evening coffee sorted out for at least a week. Four of the four original flavors (Sierra Nevada, Organic, Santander, and Huila) are currently available for purchase online in the Juan Valdez Café Store for about ten dollars per pack of ten. That’s just a dollar a cup for premium, delicious, liquid black gold.